The Judds
Girl's Night Out

October 2015 marked Blueshift Design's first Las Vegas residency design, as well as our first opportunity to design for the legendary country music duo The Judds. Located at the Venetian Theatre in Las Vegas, we were tasked with executing a design utilizing the substantial lighting rig already present at the Venetian, but also adding our personal touch to the set elements without running up costs and ensuring the design helped to emphasize the music. With the creative team at Lightswitch Inc handling the video design and content, we worked toward a design that would harmoniously unite the video and lighting into a cohesive creative statement. 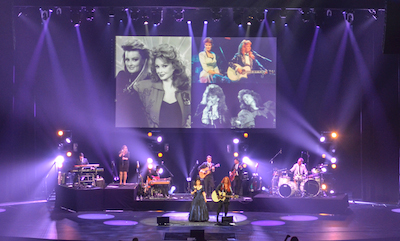 To that end, our design utilized a rig of Martin MAC Viper Profiles, MAC Auras, MAC III AirFX, Atomic 3000 strobes and Clay-Paky Sharpys, most flown overhead for aerial and texture effects on the band. Underneath the large front-projected video screen, we placed several lighting towers with not only some movers, but sixteen PARs with wide lenses for audience washing effects and also to provide some soft "twinkly" light behind the performers, perfect to emphasize the softer side of the performance. 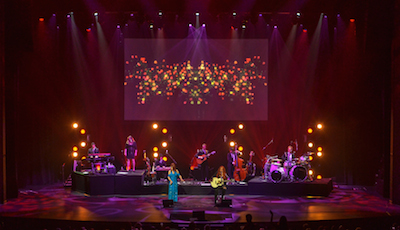 We decided to start the show in darkness, with a dramatic sharkstooth scrim reveal which segues directly into a quiet, acoustic version of "Mama He's Crazy". The show's highlights included some of the duo's greatest hits, for which we utilized a variety of pastels and warm shades to bring an undersated elegance to the design. We didn't shy away from bold saturated looks, however, particularly on Wynonna's set when she brought her consideral vocal talent to bear. Songs such as "You Make My Heart Beat Too Fast" were highlighted with firey reds and smokey ambers, while the upbeat rock hit "No One Else" featured bright yellow and blues to emphasize the crunchy guitar riffs and drum hits.

For the final act of the show, we toned things down, using warm and cool pastels and the warm incandescent glow of the rear PARs as the night finished up with soft bluegrass versions of "Grandpa, Tell Me 'Bout the Good Old Days" and "Love Can Build a Bridge." For these tender moments, we utilized some simple downlight from the AirFXs, which kept some shoulder and head light on the band without sacrificing the visual depth of the scene by using a flat wash.

Ultimately, our design was about maintaining the integrity of the musical experience and allowing the audience to take a sensory journy through thiry years of songwriting and performing history, and allowing the true stars of the show to shine their brightest.