After the phenomenal success of the country music duo Brooks and Dunn, Ronnie Dunn embarked on his solo career with a small lighting rig provided by Morris Light and Sound featuring Vari-Lite 2000-series spots and washes. The washes were placed on the floor to provide dynamic backlighting effects, while the 2202 spots were mounted up and mid-stage truss with a custom gobo load provided by Morris. Also behind the band were several Color Kinetics ColorBlast fixtures, which added pixel and strobe effects. 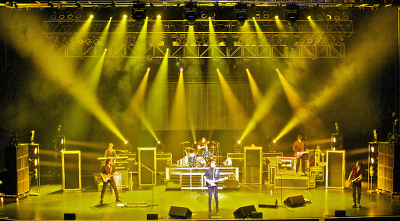 Mounted in four Sparkarts towers at the four corners of the stage were Martin MAC 301s which served as dual-purpose band side lighting and aerial effects. 301s were chosen for their cost-effectiveness, brightness, low weight and high output, along with their incredibly fast zoom which we also used as an effect during the show. The upstage Linx 18mm video screen provided by VER was fed custom content from a Green Hippo Hippotizer controlled from FOH by a grandMA series 1 fullsize. 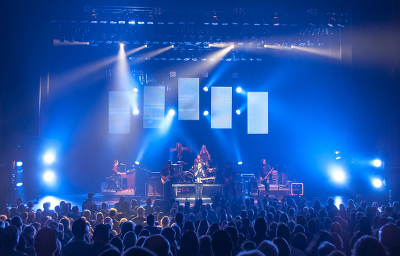 For the 2013 tour, the system was upgraded to a Robe and Clay-Paky rig, consisting of eight Robe MMX spots, 20 Robe ROBIN 600 washes positioned around the stage on both Tyler GT truss and custom aluminum ladders built for us by VER. The 600 washes were chosen for their increased output compared to a 301, and the addition of a white emitter which filled in the spectrum and allowed gorgeous skin tones. The Robe units also allow incredible control over the output, with the fixture divided into three "rings" (Which Robe calls "Zones") of lights, allowing us to use the front face of the fixture as a creative element in itself - for instance during the song "Neon Moon", when the ROBIN 600s projected intense blue "rings" of light onto the stage from all angles - an unexpected and unique effect. We also had twelve Clay-Paky Sharpy fixtures divided between the upright GT trusses and ladders.

We chose the ROBIN MMX fixtures as our primary spot fixture, and the speed of this unit's color-mixing and zoom system really shone in this application, allowing us an ever-changing palette to keep up with Ronnie's diverse repertoire of music. Rounding out the rig were four Martin Atomic 3000 strobes for strobe and blinder effects, and eight Mole-Richardson 4-Lites to provide not only additional blinder effects but a gentle incandescent glow which brought sparkling warm notes throughout key moments of the show. 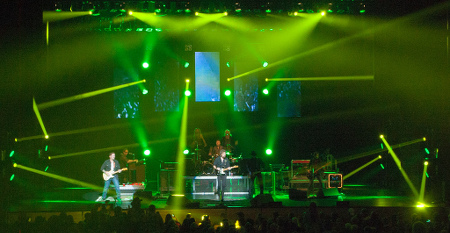 Blueshift Design was also tasked with not only designing the lighting, but the stage and set design, and we were challenged by the requirement that not only did everything have to fit onto a single tractor trailer for transport, but had to be able to adjust to all stage sizes we would encounter - from small casino stages and ballrooms to full-size arenas. With this in mind, we designed a custom aircraft-cable rigging system that allowed us to quickly deploy the video screens in the offset design which added visual interest to the stage. All our content was again sent from a Hippotizer controlled from FOH by a grandMA fullsize.

We were also tasked with handling content management as well as the creation of the custom content on the songs "Play Something Country", "Cowgirls Don't Cry", and "They Still Play Country Music (In Texas)".