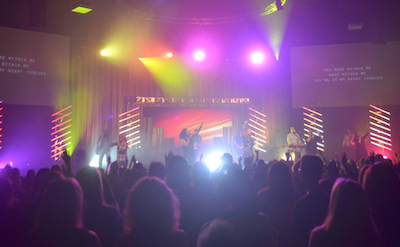 Launched in 2015, Propel Women was launched by Christine Caine, and was conceived as a traveling one-day conference featuring worship music and speakers for all walks of life. Appearing at a variety of churches around the United States, Blueshift Design was tapped to provide the set and lighting design by the conference's producer, 46 Entertainment.

The print and web artwork for the conference was in black, white, silver and gold tones, which presented a unique challenge when designing the color scheme of the event. In the end, we settled on a dramatic silver upstage curtain to catch whatever light was projected onto it and allow to paint the entire upstage with light. On this upstage truss we hung Martin MAC 700 and MAC Aura fixtures. The spots provided color and texture while the Auras were used primarily for their smooth, even-field wash.

In front of the upstage truss lay the secondary inverted "U" truss, on which the primary video wall hung. This we envisioned as an inverted triangle, in homage to the bold triangular lines on the conference artwork. These were assembled from PixelFlex 6.9mm screens rigged sideways. The screens were incredibly easy for the conference team of volunteers to assmble each day, and displayed graphics and content throughout the show. 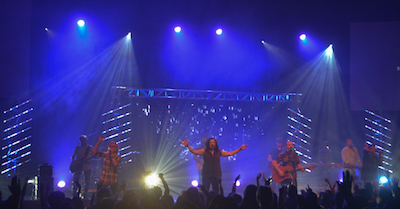 To round out the stage and provide a defined performance space for the various speakers and musicians, we mounted 60 Chauvet Epix strips in a chevron pattern to six upright trusses around the stage. These played back video from our media server and provided eye-catching visual effects, sparkles, waves, and other eye candy without overwhelming the space with video panels, allowing the message of the conference to be presented with fidelity.

Finally, we placed several additional Auras and MAC 700s on the ground around the performance area to pull togther the upstage truss and stage floor, which helped combine all the elements together in to a cohesive whole. Media played back from an ArKaos media server, and all programming and show control was done via a grandMA2 fullsize.