When First Baptist Church in Pensacola Florida wanted to upgrade their main worship space, they turned to Relevant AV, who in turned came to Blueshift Design for all aspects of the lighting design, including having the space pre-designed in Vectorworks, with several renders to show the congregation what the space would look like when completed. 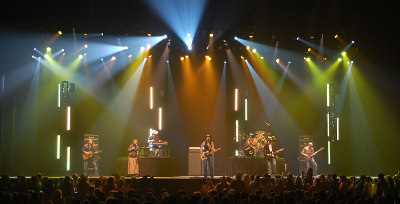 Our Vectorworks drawings, done from the archtectural CAD files, not only gave the church an idea of what the completed space would look like when finished, but modeling the space in 3D allowed us to solve several issues before they became a problem on-site. For the lighting design, we opted for a completly LED system, which conferred the cost savings of that technology to the church, while not sacrificing any of the looks they were after.

Wanting a high-quality front light, we opted for Chauvet Ovation E-910FC profiles, which use RGBAL emitters for a true and broadcast-quality light. Additional LED washses and spots went onto the rear trusses, and the upstage and side walls were washed by Chauvet linear battens to add some color and visual interest. 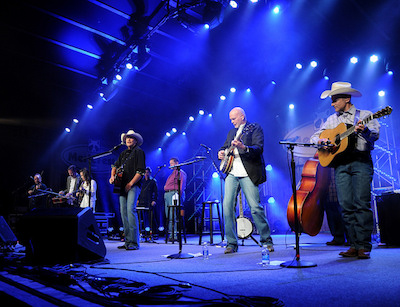 In summer of 2014, Blueshift Design was tasked with providing a completely different one-off rig for MerleFest, an annual bluegrass festival that takes place in Wilkesboro, North Carolina. For this show - which featured a completely new band and set list - we came up with four vertical towers with Chauvet COLORado 72 battens in a diagonal pattern as pixel effect lights, and several Martin MAC 301 wash units supplementing the festival rig of Robe spots and washes. We also placed several Martin MAC 101s on the ground for band backlight effects. Controlling everything from our grandMA, we seamlessly integrated the bluegrass show into the MerleFest rig, pixel-mapping the entire lighting package to provide an subtle yet unique look for the night of traditional bluegrass music. 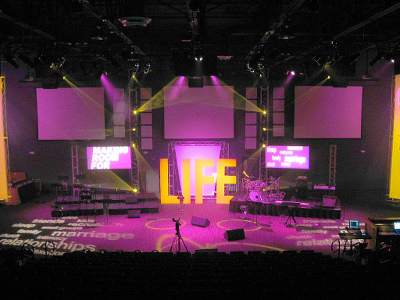 Point of Grace Church in Des Moines, Iowa utilized Blueshift Design for several years for all lighting and set designs for services. We created large format-displays that needed to be delivered on time and within budget, while still maintaining the visual impact that the church was looking for to draw congregants into the message.

Point of Grace's auditorium was built like a TV studio, with an overhead grid containing around eighty ETC Source4 PARs, Parnels, ellipsoidals, and zoom fixtures, which made lighting the sets remarkably easy. We placed 22 High End Systems Trackspots around the room for movement, color, and texture effects, all controlled from a Leviton theater desk.