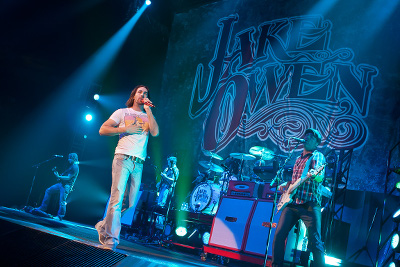 Capitalizing on the success of hit singles "Barefoot Blue Jean Night", "Alone With You" and "Startin' With Me", country music star Jake Owen embarked on a tour with industry icon Keith Urban in support of his "Get Closer" tour while also playing his own tour in clubs, fairs, and other events. Travelling with a rig designed by Morris Light and Sound and with lighting design by Blueshift Design, the rig had to fit into a single tractor trailer while packing enough punch to keep up with Urban's arena rig - and still be able to fit into the tiniest bar or club.

This rig consisted of six custom-built Sparkarts towered painted fire-engine red to match the decking that we traveled with, in addition to the custom red Marshal cabinets. Each tower held 4 Martin MAC 301s yoked-out toward the audience, and had a Clay-Paky Sharpy on top for powerful, punchy beam effects and pattern projection. An additional rolling riser underneath the drum riser held four more MAC 301s. To provide maximum visual impact, the 301s were fully pixel-mapped with the grandMA software's bitmap effects, with custom bitmaps created for all the songs to match the mood and tempo of the music happening on the stage. 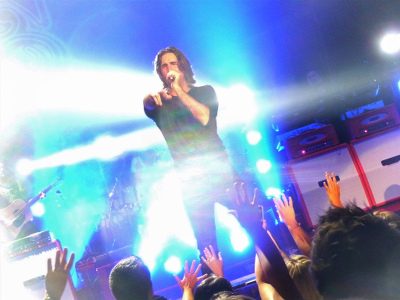 We also took advantage of the translucent acrylic drum set that Myron Howell (Jake's drummer) toured with, and attached several layers of RGB LED tape inside the shells of the drums to provide dynamic backlighting and color effects. The tapes were controlled from a small DMX controller and connected into the existing rig via custom DMX dongles. This system allowed us to the entire drum kit from within in any color desired, and combined with macros and cue-intensive programming to match the music, allowed some truly impressive effects.

When supplementing Urban's rig, we took full advantage of the Vari-Lite VL3000 spots, VL3500 washes and extra Sharpys to create huge, stunning looks. The entire rig - on both Urban days and our own tour days - was controlled by an MA Lighting grandMA series 1 running Art-Net over Ethernet to the stage. To save time, the entire show was pre-programmed in ESP Vision and MA3D, allowing the creation of incredibly precise cuelists and hits to perfectly sync with the music on stage.