Following on the heels of one of the most talked-about tours of 2016, electropop artist Ashley Frangipane, known better by her stage name Halsey, took to the road to promote her critically-acclaimed Album, Hopeless Fountain Kingdom. With a set designed by Soother Routhier of SRae Productions, the tour showcased a gargantuan video stair set that swept dramatically upward toward two upstage ROE LED screens. 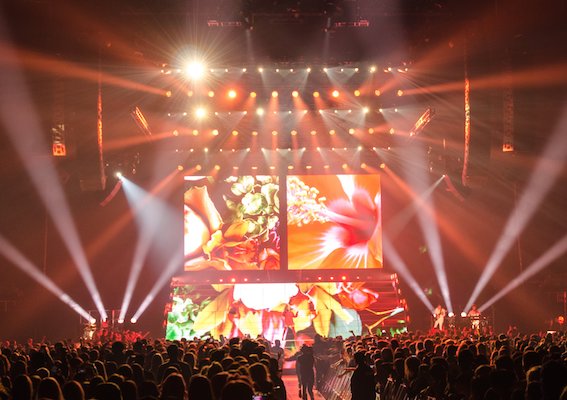 Utilizing the powerful Notch effects on the two Disguise servers, Blueshift Design together with All Of It Now programmed a variety of looks to distort the IMAG, blending the live incoming camera feed and the lighting to create cohesive and dynamics effects that Ashley could interact with on stage, moving the video to the music in ways not seen before. 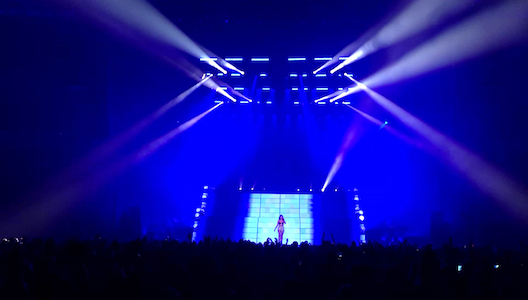 Long horizontal trusses were lined alternately with Clay-Paky Scenius Profiles and Robe Spiider LED wash lights, with each truss being faced on top with TMB Flare LRs, a linear batten version of the Flare with an extremely bright output. The lighting programming was handled by Andre Petrus and Blueshift Design, with the entire show controlled via timecode to keep pace with the frenetically energetic performer.

Additionally, the stairs were lined with more Spiiders, to provide sidelight on the performer and dancer, as well as showcasing the Spiiders' eye-catching pixel-mapping capabilities. Near FOH, a B-stage with a water gag and additional Spiiders and Flares hung above it provided a chance for Halsey to get closer to her fans, and a visual break from the overwhelming presence of the main stage. The trusses above the stage were all automated, and tilted and raked, danced and moved, to provide an additional layer of visual splendor to the performances. Automated Clay-Paky Scenius spotlights provided a bright and consistent light on Ashley from night to night, and the freedom of having color-mixing for our followspots opened new artistic doors for us. 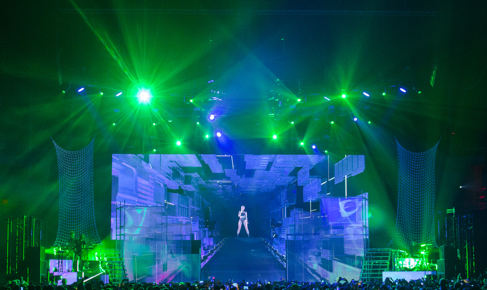 Blueshift Design design was tasked with the touring direction and on-site pre-production programming. We also directed the placement of the rig into different spaces and stages, ensuring a consistent audience experience from night to night.

Further, we also provided the full lighting design and programming for "Now or Never", "Don't Play With Me", "Lie", "New Americana", "Eastside", "Control", "Haunting", and others.