Contemporary Christian Music artist Big Daddy Weave has been touring full-time for the past several years, and always requires an extremely versatile rig to complement their diverse set list, which ranges from the full-on rock sounds of "Magnificent God" to the contemplative sounds of their chart-topping single "Redeemed". Blueshift Design was tasked with developing a lighting system that would be able to handle the most intimate church setting while still packing the raw power needed to bring thousands of worshipers together in an arena setting.

The band has always been eager to try new gear as it comes out, and in 2010 we specified the Martin MAC 301 wash alongside the Elation Platinum 5R spot. Weight and power are always limited in smaller venues, and we needed a solution that would provide maximum impact and while still fitting into a trailer pack. The 5Rs were specified for their high output to power consumption ratio, and the 301s were utilized in a dual role as a large area washlight and a beam effect fixture, putting this fixture's zoom ability to full use. For audience-wash effects and additional eye candy, several Martin Stagebar 54S were rigged from vertical pipes off the upstage truss, with four more units on pipe-and-base on the floor. 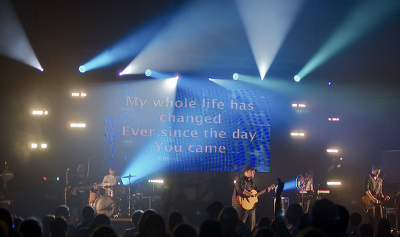 The amber and white source of these fixtures helped fill in the spectrum "valleys" typically left by RGB fixtures, and helped create some breathtaking pixel and backlighting looks. The ability to mimic a warm incandescent source was particularly useful here, as all our dimming was reserved for the FOH band spots. To fully use the fixture's pixels, we created custom bitmaps for all the songs with the grandMA's bitmap effects engine. 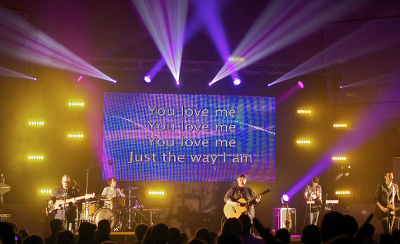 For the 2011 tour, we designed and fabricated a set with several custom incandescent fixtures - large gym lights with mercury-vapor lamps were gutted and replaced with low-wattage incandescent lamps to provide a gentle back glow and large hits on the more uptempo songs. In 2013, the decision was made to finally purchase some lighting to carry full time, and the band acquired several Martin MAC Aura fixtures, as well as MAC 101s and a variety of James Thomas Engineering PixelRange fixtures for pixel effects and audience washing. Blueshift Design was tasked with designing a set that would be able to scale in any size venue, so we rigged the Auras and PixelLines from two vertical truss towers, and placed the 101s in a "ring" on vertical pipes around the band on the floor, utilizing the Auras as both wash and beam effect units - and taking full advantage of the "aura" capability to provide arresting eye candy effects from this unique fixture.

Having lyrics displayed for all their songs during the concert is of great importance to the band, so since 2011 they have traveled with an 18mm PixelFlex screen from Elite Multimedia. Blueshift handled content selection and programming for the songs to ensure that colors and tempos would be consistent across the concert, never detracting from the message the band was conveying from stage.