Country music artist Alan Jackson returned once again to Blueshift Design in 2017, turning to us to provide a dynamic lighting, video, and set design to emphasize his twenty-six (and counting!) years of country music mastery.

As the budget did not change, we were required to work within the requirements of the previous year. We decided to stay with the core package of Vari-Lite VL3515 LT spots, Martin MAC 301 washes, and Martin MAC 700 washes. This year, however, we decided to move all of the lights to up and midstage positions and light the band with only the DS ellipsoidals. 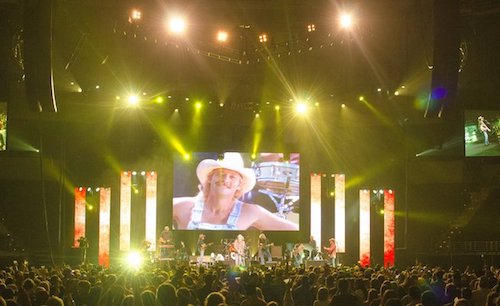 The VL3515 LTs (for Long Throw) have an 1500-watt lamp and optics with incredible 10:1 zoom range, and provide powerful beam of light that appears uniquely solid. We used this for beautiful gobo and sparkling effects on the stage and audience, and for emphasizing band memebrs during their critical solo portions of the performance.

To further break up the stage and differentiate it from last year's "wall of light" set design, we spread the PixelFlex 10mm curtain out horizontally across the stage, hanging four strips either side that echoed or contrasted the media and lighting looks for each song, adding a separate and distinct layer to the overall look of the show. Hanging between the strips was one Martin MAC 700 wash each. 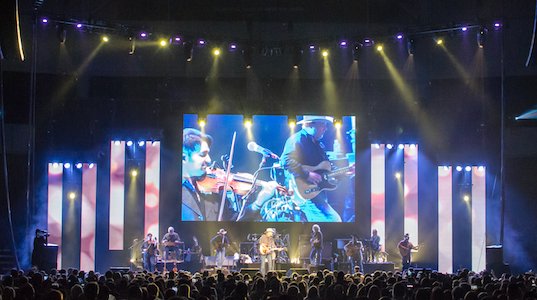 Front light is provided by Chauvet Ovation E-160 WW warm white LED profile fixtures, which perform brilliantly as replacements for a true tungsten source, and allows the tour to leave behind the hassle of lamp changes and blowups. Having separate ellipsoidals for the musicians helps provide a consistent front light for solos and general face light from show to show, and frees the followspots to always light Alan.

Our song design was, as always, informed heavily by the music and by the rock concerts from which Alan draws inspiration. This year's design continued to use video capture cards for our media server, allowing us to route video to the screen as another layer of content, which gave tremendous flexibility in presenting not only the famous music videos which Alan pioneered, but also the dynamic IMAG shots captured by Robbie Luttrell, Alan's talented video director.

Visually, we utilized the full color spectrum, building looks as the show runs, but always keeping the lights thematically appropriate and color-coordinated to the music videos. For instance, Livin' On Love shines down on the band with subtle shades of lavender and amber, colors as warm as the love the music conveys. Conversely, for Good Times, we pull out all the stops, lighting the song with a combination of raucous reds and yellow as video of the record-setting world's longest line dance pumps up the audience near the end of the night. 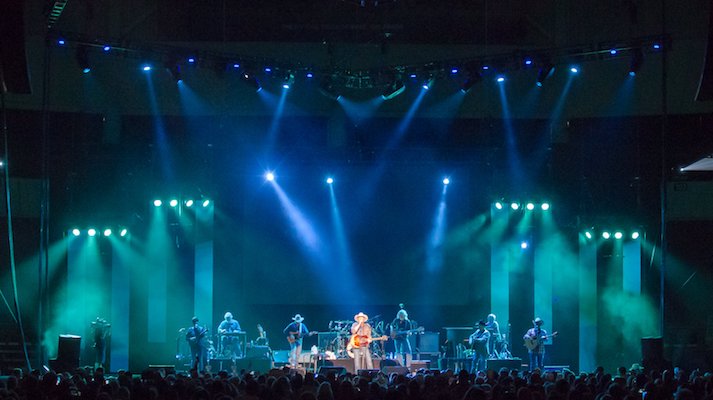 Hanging from the upstage truss are panels of PixeflFlex 12.5mm FlexCurtain LED curtain, fed with both custom video content from an ArKaos media server and IMAG from roaming and stationary cameras. At front of house, a grandMA 2 Lite feeds MA-Net and Art-Net to an NPU, which then distributes the DMX to splitters before going to the rig.

Two ReelFX DF-50 haze units provide atmospheric effects for the lights, and all of the tour's lighting gear is provided by Elite Multimedia Productions out of Nashville, Tennessee. The talented lighting director Jason Blasing provides LD duties out on the road, with logistics, trucking, and tour management being handled by Nathan Baugh of 46 Entertainment.